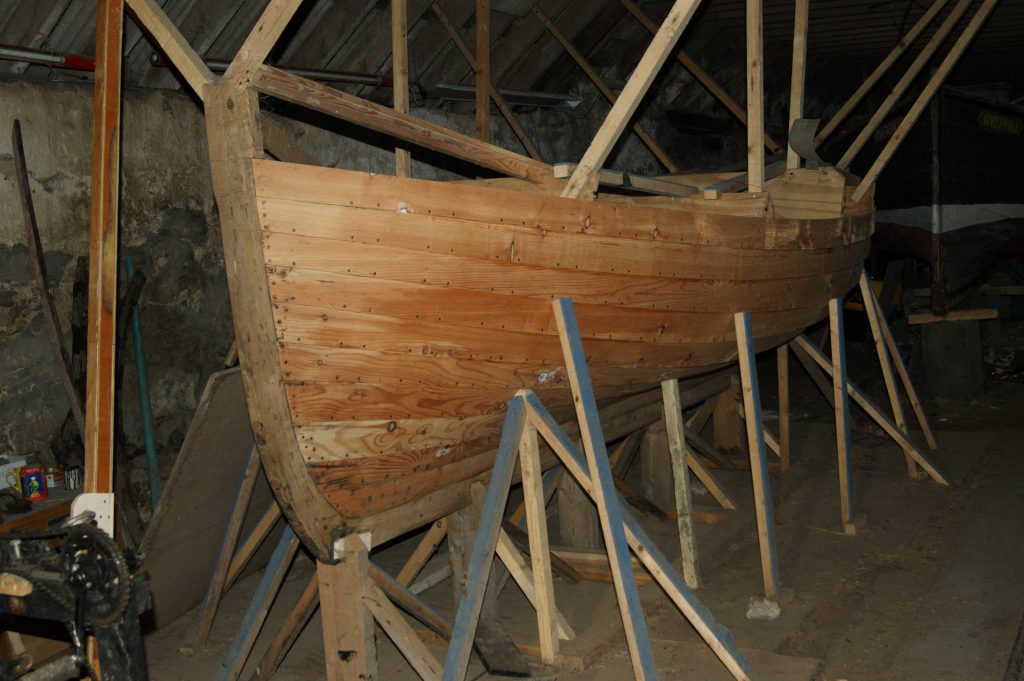 For several years a collection of old boats has been stored in Cowhythe Steading east of Portsoy, mostly gifted to Portsoy Maritime Heritage as they had reached the end of their working lives. With the agreement of all its members, Portsoy Maritime Heritage ceased to exist as an organisation and passed its assets, a derelict property by the Old Harbour, the boats and miscellaneous items and its funds via a legal process to the Scottish Traditional Boat Festival, now named Portsoy Community Enterprise (PCE).

The transfer included confirmation that all the boats were owned by the Heritage group, having been donated or simply left. Very few donor or ownership details were provided and those that were, were only provided verbally. No commitment was sought or given that the boats at Cowhythe would be restored.

Since taking over the operation, PCE raised the funds (just under £500,000) for the restoration of the derelict property, which was completed in October 2015 as the Boatshed. This has proved to be a highly successful facility for traditional boat building and repair, including teaching teenagers basic boat building skills.  Work is also progressing on the committed restoration of the Zulu.

More recently, PCE has surveyed all the boats in storage to determine their condition, and sadly concluded that, other than the Zulu, they are all beyond the capability of the small team of Boatshed volunteers to restore.

Consequently a decision has been made that the vessels should not be left to decay, but be dealt with in the best way possible. Since PCE holds legal title as owner of the vessels, as a first step they have decided to offer them, free of charge, to anyone in the area who is interested in taking them on, with priority being given to the original donors.

Potential owners need to be aware that considerable work including boatbuilding skills is required on some of the boats. New owners would also have to take them away for restoration, as there is no facility to do so at Cowhythe. Sadly, some of the boats are beyond repair and require to be disposed of in a more final manner. However, before any decision is made, if you are really interested in a challenge and can see yourself making good use of one of these boats, please get in touch via contact@portsoyboatshed.org and arrangements will be made to pass you more information.

This window of opportunity will be open from now until April 8th, 2017, after which PCE’s Board of Trustees will make final decisions on the future of the boats. Please apply before this time if you are interested.